Before the Second World War, all aircraft used a piston engine as the power of the aircraft. The engine itself did not produce forward power. Instead, it needed to drive a pair of propellers to rotate the propeller in the air. Push the plane forward. This combination of piston engine + propeller has always been a fixed propulsion mode for aircraft, and few have raised doubts.

By the end of the 1930s, especially in World War II, the performance of the aircraft had developed rapidly due to the needs of the war. The flight speed reached 700-800 km/h and the altitude reached more than 10,000 m, but people suddenly found that the propeller plane It seems to have reached the limit, although engineers have increased the power of the engine from 1000 kW to 2,000 kW or even 3,000 kW, but the speed of the aircraft has not improved significantly, and the engine clearly feels "not able to make it".

The problem lies in the propeller. When the speed of the aircraft reaches 800 km/h, since the propeller always rotates at high speed, the tip of the propeller is actually close to the speed of sound. The direct consequence of this transonic flow field is that the efficiency of the propeller drops sharply. The thrust is reduced. At the same time, due to the large windward area of â€‹â€‹the propeller, the resistance is also large. Moreover, as the flying height increases, the atmosphere becomes thinner and the power of the piston engine drops sharply. Together, these factors have determined that the propulsion mode of the piston engine + propeller has come to an end. In order to further improve the flight performance, a new propulsion mode must be adopted, and a jet engine emerges as the times require.

The principle of jet propulsion is no stranger to everyone. According to Newton's third law, the forces acting on objects have equal and opposite reaction forces. When the jet engine is working, it draws in a large amount of air from the front end and burns it at a high speed. In the process, the engine applies a force to the gas to accelerate it backwards, and the gas also gives the engine a reaction force to push the aircraft forward. In fact, this principle has been used in practice for a long time. The firecrackers we played have been flying on the sky by the reaction force of the tail gas sprayed with gunpowder gas. 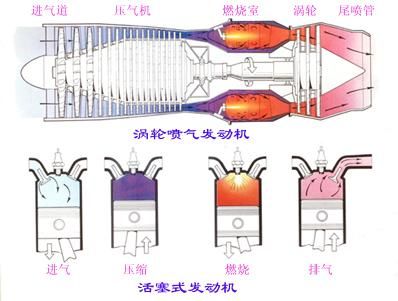 As early as 1913, the French engineer Rennes. Lorraine patented a jet engine, but it was a ramjet engine that didn't work at low speeds at the time and lacked the high-temperature heat-resistant materials needed. Frank, 1930. Whittle made his first patent for gas turbine engines, but it wasn't until 11 years later that his engine was completing its first flight, and Whittle's engine formed the foundation of a modern turbojet.

The structure of a modern turbojet engine consists of an intake port, a compressor, a combustion chamber, a turbine and a tail pipe. There is also an afterburner between the turbine and the tail pipe of the fighter. Turbojet engines are still a type of heat engine. They must follow the principle of work on heat engines: input energy at high pressure and release energy at low pressure. Therefore, from the principle of generating output energy, the jet engine and the piston engine are the same, and all of the four stages of intake, pressurization, combustion, and exhaust are required, except in the piston engine. The four stages are performed in a time-sharing manner, but in a jet engine, the gas flows sequentially through the various parts of the jet engine, corresponding to the four working positions of the piston engine.

The air first enters the intake port of the engine. When the aircraft flies, it can be seen that the airflow flows to the engine at the flight speed. Since the speed of the flight of the aircraft changes, the speed of the compressor adapting to the flow has a certain range. Therefore, the function of the intake port is to adjust the flow to a suitable speed through an adjustable pipe. In supersonic flight, the airflow speed is reduced to subsonic speed before the intake passage and in the intake passage. At this time, the stagnation of the airflow can increase the pressure by a factor of ten or even several dozen, which greatly exceeds the pressure increase multiple in the compressor. Thus, a ramjet engine that relies on speed stamping alone and does not require a compressor is produced.

The high-temperature and high-pressure gas flowing out of the turbine continues to expand in the tail pipe and is discharged backward from the nozzle at a high speed in the axial direction of the engine. This speed is much greater than the speed at which the airflow enters the engine, giving the engine a reactive thrust.

In general, the higher the temperature at which the airflow exits the combustion chamber, the greater the input energy and the greater the thrust of the engine. However, due to limitations of turbine materials, etc., it can only reach about 1650K at present. Modern fighters sometimes need to increase the thrust for a short time, and then add an afterburner to the fuel after the turbine to inject fuel to allow for insufficiently burned gas and injection. The fuel mixture is burned again. Since there is no rotating part in the afterburner, the temperature can reach 2000K, which can increase the thrust of the engine to about 1.5 times. The shortcoming is that the fuel consumption increases sharply, and the excessive temperature also affects the life of the engine. Therefore, the engine opening force is generally time-limited. The low altitude is only a dozen seconds. When used for take-off or combat, it can be opened at high altitude. time.

Although the jet engine consumes more fuel than the piston engine at low speeds, its excellent high-speed performance has quickly replaced the latter and become the mainstream of aero-engines.

Vulcanizing agent can make the rubber linear molecular into a three-dimensional network structure and mechanism through the vulcanizing agent of [bridging", so significantly improved the rubber mechanical and physical properties of rubber.