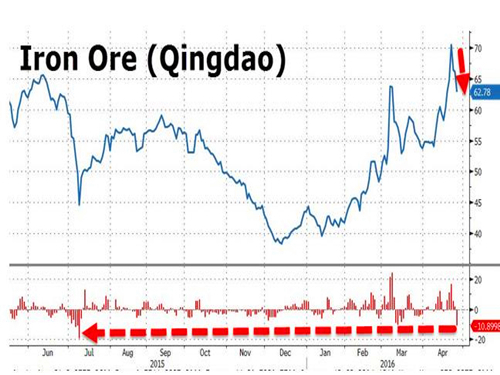 Goldman Sachs expressed concern about the surge in speculative trading of iron ore in China, saying that the current daily volume is too large and sometimes even exceeds annual imports.

According to Bloomberg News, according to reports released by Goldman Sachs analysts Matthew Ross and Jie Ma on Tuesday, as the world's largest importer of iron ore, the recent surge in transactions among ferrous metals is one of the factors driving up iron ore prices. The number of iron ore traded on the Dalian Commodity Exchange has more than quadrupled over the same period of last year.

Two analysts pointed out that

As China's fixed-asset investment grew, advances in steel production activities (prior to government restrictions) and the disruption of mining activities explained the recent strong rise in iron ore prices. However, one of the driving forces that most worried us was the increase in speculation in the iron ore market in China.

According to an article by Bloomberg, as China's monthly output of steel hits a new high, the speculative behavior of China's commodity market has increased explosively, supporting the soaring price of iron ore. Morgan Stanley stated that as an example of the trading of ore and steel in the metro, the recent surge in raw material transactions in China has shocked the global market and prompted Asian top trading institutions, including commodity exchanges in Dalian, to tighten up. Some contract trading rules.

The financial blogger ZeroHedge article stated that excessive trading activities will need to be curbed, or will start a new safe-haven stage in China. The article quoted a trader as saying, "The market is developing so quickly, it feels like it was before the stock market crash last June ... I think how it will go up and how it will come down."

Goldman Sachs analysts wrote in the report, â€œIn the past month, there have been two trading days when the volume of iron ore ** exceeds the full year 2015 imports (950 million tons).â€ In order to slow the hot money speculation The behavior of commodities, Dalian Commodity Exchange has announced that it will increase the iron ore transaction margin requirements and transaction costs.

Since last week, the â€œblack lineâ€ frenzy has been staged in the domestic merchandise market, and the price of â€œblackâ€ merchandise, including main contracts such as rebar and iron ore, has skyrocketed. The price of iron ore ** on the Dalian Commodity Exchange has risen by 40% during the year and has only risen by 16% in the past week. On Tuesday, the iron ore** contract fell by 4.4% after the exchange increased transaction costs.